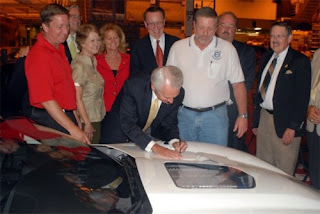 In 2007 a bill was introduced to make the Chevrolet Corvette the state sports car of Kentucky. Now, after three years and almost getting turned away, it has been finalized as Governor Steve Brashear signed the bill.

Although the Corvette has such a high popularity and reputation the bill almost did not pass. With the recent troubles in the industry, the bill was almost abolished. However, as the industry is resurrecting itself, the bill was quickly brought back to the surface.

As Bowling Green, Kentucky is home of the Corvette plant, Kentuckians have long considered designating the Corvette as Kentucky's sports car as it would display the state's craftsmanship and pride. Now, it is official, the Chevrolet Corvette has become the icon of sports cars in Kentucky.
Posted by Tom Gill Chevrolet at 8:36 AM